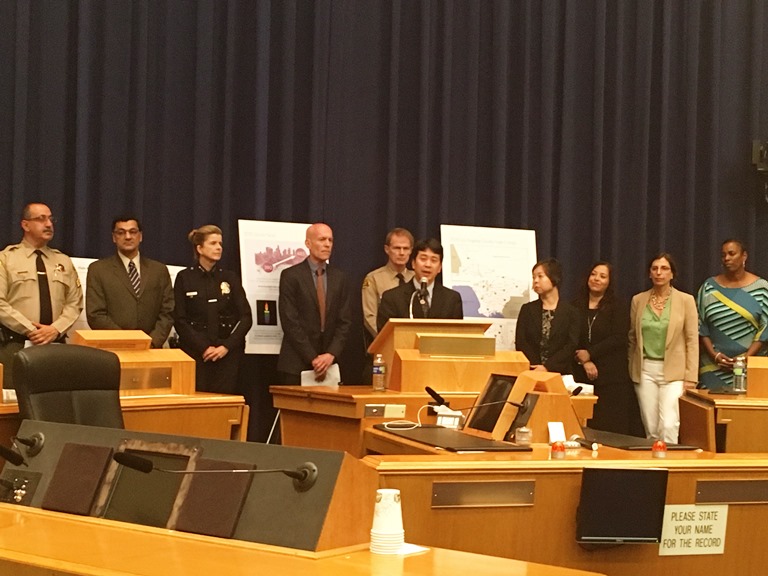 The Los Angeles County Human Relations Commission held a press conference releasing its annual report on hate crime for the year of 2015 at the Kenneth Hahn Hall of Administration on Thursday, Sept. 29.

The report is made up of data surrounding reported crimes commited due to race, sexual orientation, religion, gender, disability and unknown. Compared to 2014, there were increases in every category except disability in 2015. The number of reported crimes rosefrom 390 to 483. While the number of hate crimes against Black people has significantly gone down during the last decade, they still remain the most targeted group. According to the data, a significant factor driving the overrepresentation of Black people as hate crime victims are attacks by street gangs of other ethnicities.

“There were increases across the board, but the largest number of hate crimes targeted African Americans,” said Robin S. Toma, executive director of the LACHRC. “They represent only 8.3 percent of county residents but were 58 percent of victims of racial hate crime. And disproportionality that is disturbing.”

Hate crimes targeting many other groups rose in 2015. Anti-Latino crimes went up 69% from 2014. There were 61 reported, which is the highest number since 2010. There was also an increase in crimes against Jews, gay men, lesbians, Muslims, Asian Americans, Armenians and transgender women. Toma attributes some of the increase to the recent presidential election along with popular culture. He also noticed an increase in anti-Muslim crime after the attack in San Bernardino.

The data is compiled of reported hate crimes, but there are many more that go unreported. One of the major issues that the commission deals with is underreporting. Victims are often scared or intimidated, causing some of the data to be skewed. The United States Justice Department found that there are 22 to 40 times more hate crimes than are reported across the country. Assistant Chief of the LAPD Beatrice Girmala made it a point to focus on this issue during the press conference.

“Please report without fear,” said Girmala. “The LAPD is committed to impacting hate crimes and hate incidents and we want to make sure that every facet of every community in the city of Los Angeles feels that they can come out of any shadows that they may believe that they have to exist in and come forward and report any hate crimes or incidents.”

“Even if the hate crimes supplemental report is showing an increase, that’s a good thing because our awareness will be increased as well,” continued Girmala.

The Commission on Human Relations has been putting this report together since 1980 to figure out trends in hate crimes so that they can be combatted better. They also partner with many youth organizations, including Brotherhood Crusade, along with having a countywide dispute resolution program which partners with 13 nonprofit and government agencies the employs dozens of peace makers throughout Los Angeles.

For more information about the 2015 hate crime report, visit www.lahumanrelations.org/hatecrime.