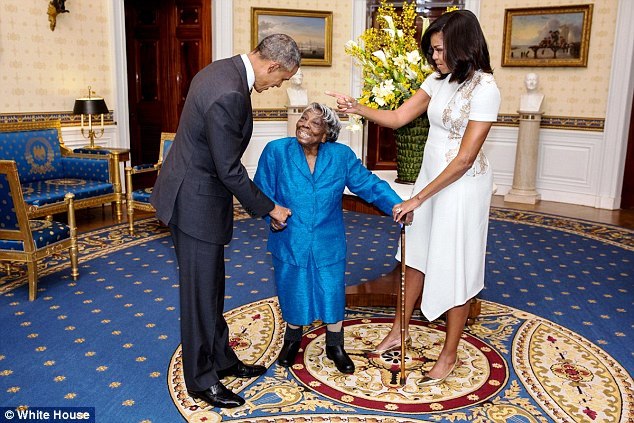 A 107-year-old woman who gained Internet fame for her impromptu dance with President Barack Obama has received a temporary photo identification card after her lack of a birth certificate stymied her earlier efforts to get one.

Virginia McLaurin could not obtain a replacement for a photo ID that was stolen years ago because she lacks a birth certificate, The Washington Post reported on Saturday. McLaurin, who is black and was born in segregated South Carolina in 1909, told the Post she was birthed by a midwife and her birth date was written in a Bible.

On Tuesday, District of Columbia Mayor Muriel Bowser presented McLaurin with a new temporary card and announced regulations giving city residents 70 and older more options to obtain identification. New federal regulations have made it harder to get the ID required to board airplanes.

Without the new ID, McLaurin couldn’t fly to New York or Los Angeles for interviews about her videotaped meeting with Obama that went viral online.

“I am especially happy to know that now all seniors in D.C. will be able to get an ID more easily,” McLaurin said in a statement released by the mayor’s office.

McLaurin danced with joy upon meeting Obama in February during a Black History Month reception at the White House and said afterward that she could finally die happy. She had petitioned the White House asking to meet him, saying she thought she’d never live to see a black president.