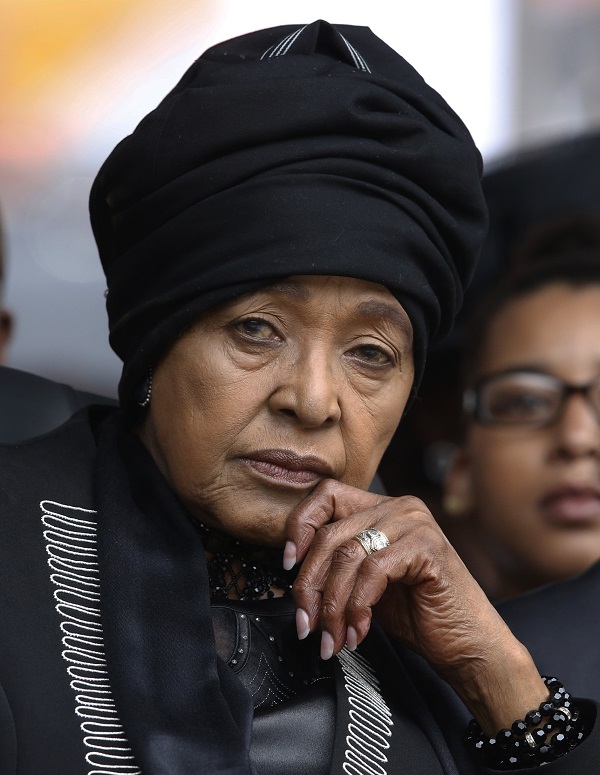 One of South Africa’s greatest icons, anti-apartheid campaigner, and former wife of late President Nelson Mandela, Winne Madikizela-Mandela, passed away at the age of 81 after a long battle with an illness. Her death was confirmed on Monday, April 2.

In early March of last year, the Global International Network reported that the veteran activist had been hospitalized for observation. According to the article, Madikizela-Mandela was “absolutely fine and doing great.” The article went on to say that the “doctors would soon discharge her.”

The Mandela family released a statement on her death.

“Mrs. Madikizela-Mandela was one of the greatest icons of the struggle against apartheid,” read the statement.

“She fought valiantly against the apartheid-state and sacrificed her life for the freedom of the country. The Mandela family is deeply grateful for the gift of her life and even as our hearts break at her passing‚ we urge all those who loved her to celebrate this most remarkable woman.” 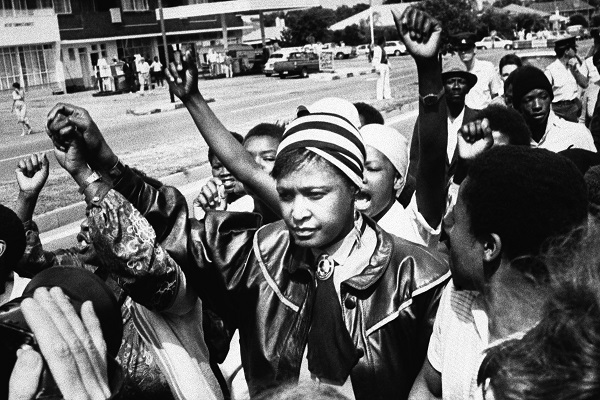 FILE – In this Jan. 22, 1986 file photo activist Winnie Mandela is cheered by supporters after appearing in the Krugersdorp Magistrate’s court, West of Johannesburg in connection with her arrest for flouting a banning order which prevents her from living in her Soweto home. Winnie Madikizela-Mandela, prominent anti-apartheid activist and the ex-wife of Nelson Mandela, died in a hospital on Monday, April 2, 2018 after a long illness, her family said Monday. She was 81. (AP Photo, File)

In 1936, Madikizela-Mandela was born in Bizana, South Africa. Later, she moved to Johannesburg to study at the Jan Hofmeyr School of Social Work. After completing her studies, she went on to become the first Black medical social worker at Baragwanath Hospital in Johannesburg.

In 1957, she met her former husband and attorney Nelson Mandela, who was the leader of the African National Congress, an organization working to end South Africa’s apartheid system. The following year, at the age of 16, she married Mandela and the two went on to become one of the most famous political couples of the 20th century. Throughout their marriage, her husband spent the majority of his time behind bars due to political activities. As a result, Madikizela-Mandela was left to raise their two daughters Zenani and Zindzi on her own. Mandela decided to send her girls to a boarding school in Swaziland to provide them with a more “peaceful upbringing,” while she worked on ending apartheid.

At one point in her life, Mandela was arrested by the government under the Suppression of Terrorism Act, which caused her to spend over a year in solitary confinement and successive torture. After her release, she continued her life’s work as an activist and was arrested more than seven times.

In 1990, Nelson Mandela who served 27 years was released from prison. Later, the two separated in 1992 and divorced. 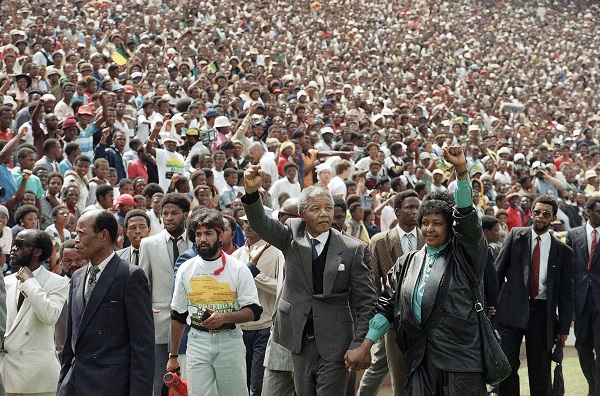 FILE – In this Feb. 13, 1990 file photo, Nelson Mandela and Winnie Mandela give black power salutes as they enter Soccer City stadium in the Soweto township of Johannesburg, South Africa, shortly after his release from 27 years in prison. South Africa’s President Jacob Zuma says, Thursday, Dec. 5, 2013, that Mandela has died. He was 95. (AP Photo/Udo Weitz, File)

Over time, Madikizela-Mandela’s legacy has proven controversial. Her name became “tainted” after accusations of fraud and murder. Despite the claims, she went on to be elected as the president of the ANC Women’s League and the following year, she was elected to Parliament. Despite the controversies following her role as a prominent South African leader and activist, her contribution to the country will not go overlooked.

Recently, national and local political figures amongst many other celebrities and activists gave their condolences to the Mandela family.

“In the darkest hours of the struggle to free South Africa, with Nelson Mandela in prison, the face of hope and courage was #WinnieMandela. May she forever rest in #Power,” said Rev. Jesse Jackson Sr. in a Twitter post.

“She had a kind demeanor that just kind of attracted you to her,” he said.

“She was so insightful about the future of South Africa and all that she and her family endured. She was just a source of inspiration obviously to me and to the world. I am honored to have met her and have had personal conversations with her in my lifetime.”

Congresswoman Maxine Waters also spoke on the death of Madikizela-Mandela.

“In addition to her activism that inspired and motivated the international community to join the struggle to end apartheid, Winnie Mandela especially empowered and galvanized women to rise up and speak out against the abuses of the apartheid regime in South Africa,” she said.

“Winnie Mandela popularized the statement, ‘When you strike a woman, you strike a rock,’ which indicated that women were firmly planted in their efforts to end apartheid and became an international slogan for the strength and fortitude of women who could not, and would not, be moved. I join the world in offering my sincere condolences to her two daughters, Zenani and Zindziswa Mandela, her relatives, friends, and the people of South Africa.”

Archbishop Emeritus Desmond Tutu and his family sent their condolences to the Mandela family.

“Madikizela-Mandela refused to be bowed by the imprisonment of her husband or the perpetual harassment of her family by security forces, detentions, banning’s and banishment. May Mam’ Winnie rest in peace and rise in glory,” he said.

Congresswoman Karen Bass who saw Madikizela-Mandela as an advocate, warrior, and civil rights champion for the people.

“Mrs. Madikizela-Mandela’s lifelong fight for freedom and equality will be remembered in the hearts of the thousands who would not be free today without her struggle. My thoughts are with her family and her country as they mourn.”

Although “Mother of the Nation” has passed away, her inspiring words still fill the country of South Africa.

“I am the product of the masses of my country and the product of my enemy,” she said.” Together, hand in hand, with our matches and our necklaces, we shall liberate this country.”