Saturday, February 29, TV host legend Oprah Winfrey shares her vulnerability and struggle with her weight with 13,000 people.  Present at the Forum here in Los Angeles was  local elementary school teacher, Merial Levy, who  shared  her  caterpillar to butterfly transformation using the Weight Watcher program. WW (Weight Watchers redefined) partnered with Oprah Winfrey to create a tour entitled, Oprah’s 2020 Vision: Your Life in Focus. They traveled in positive protest about living the best possible version of one’s  life. On Tour through nine different cities, Oprah created a “day long party”, full of interactive projects and soul searching.  The queen of interviews used her personal testimony and Instructor Merial Levy’s  journey as examples of what health can do to change one’s life. 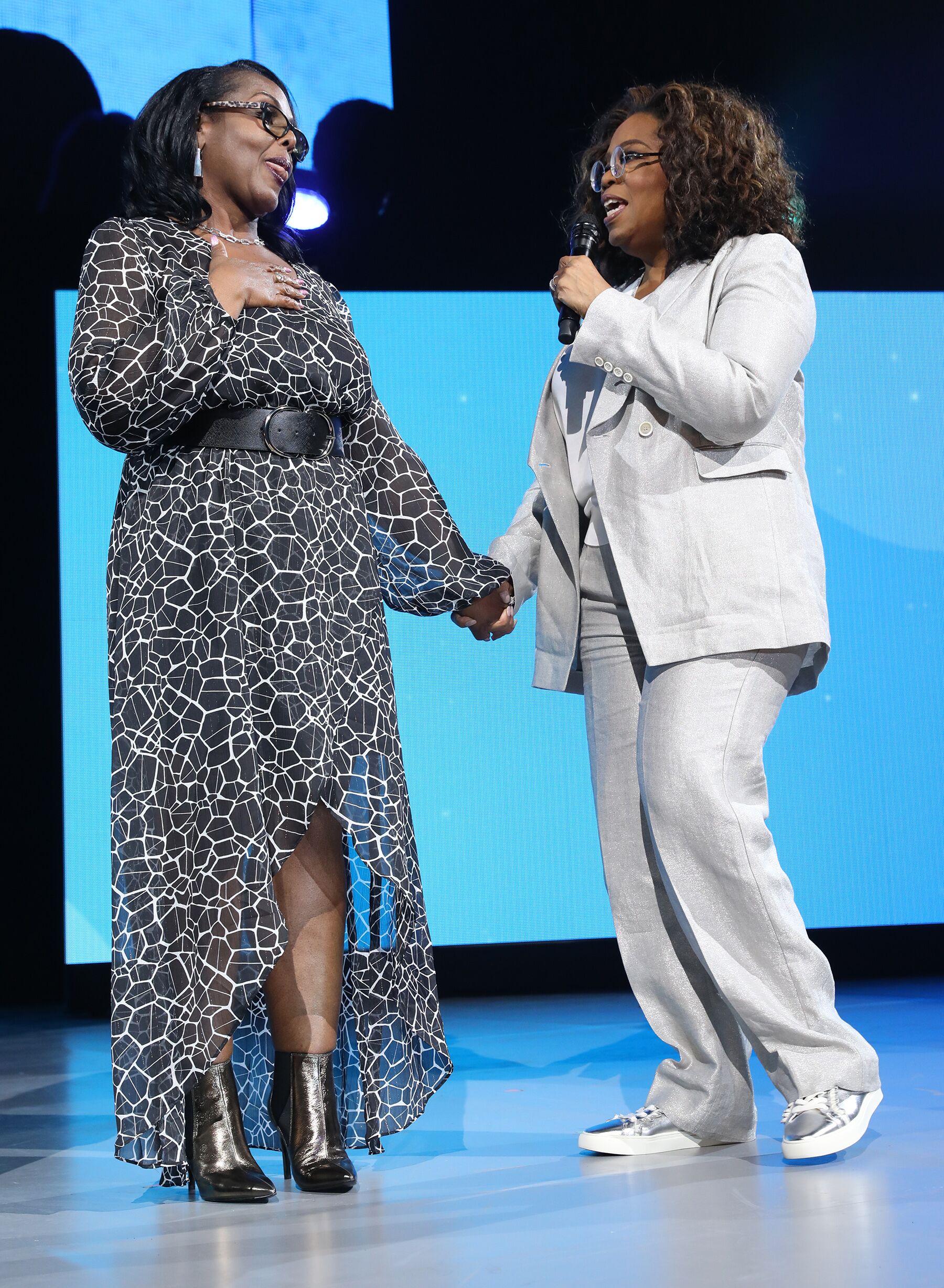 The Day event opened with the Global dance party phenomenon Daybreaker. Hearts began to race as the dance tribe charged up the energy in the stadium. Daybreaker is “A morning dance party that will start your day with energy and intention.” They  inspired 13,000 people  to move their bodies and dance to an upbeat rhythm with no judgement attached. There were moments of guided steps, but it also had intervals of free form movement.

Following the caffeinated moment, the stadium went dark. The Audience roared as Oprah came out to welcome them. She shared her appreciation of the turnout, and started digging deeper into  the significance of the tour. Through her introduction, Oprah recognized  local contributors to healthier and healing lifestyles. Such as the Sisterhood of The Forum Walkers; they are a local group of women who have nominated The Forum Stadium to be their informal track and field area. Oprah shared a video of her surprising them and joining their daily walk around the Forum.

Included in inspirational spill was the transformation of Merial Levy, a Los Angeles school teacher who lost 156 pounds by following the WW wellness plan. Oprah explored Levy’s journey and explained the magnitude of her  accomplishment as a visual display of the transformation aired  on the stage monitors. Merial entered college with her weight being 200 pounds. As life stressors continued to build, Levy’s  weight reached 343 pounds. As she went through her career as an educator, daily tasks like walking across school grounds became  a strenuous mission. At  one point, young students would have to push Merial  in a wheel chair to get across the school field. Merial Levy candidly admitted to using food as a “ problem solver,” that led to an unhealthy relationship with poor dietary consumption. The school teacher  sought change, and through the WW lifestyle, Levy transformed her very essence. Her approach to life changed dramatically, even altering  her strides across school grounds. Merial Levy appeared on stage glowing, no wheel chair assistance needed,  in a flowing patterned dress to greet Oprah. They spoke of her triumph and what it takes  to  maintain her healing practices. Levy continues to strive for her best self by going to the gym five times a week . In full transparency about her journey,  Levy confessed to Oprah  on stage, “ …l’m a cryer…but I cry now because I know I can do it..” Merial  inspired so many lives, including her fellow faculty members and students. 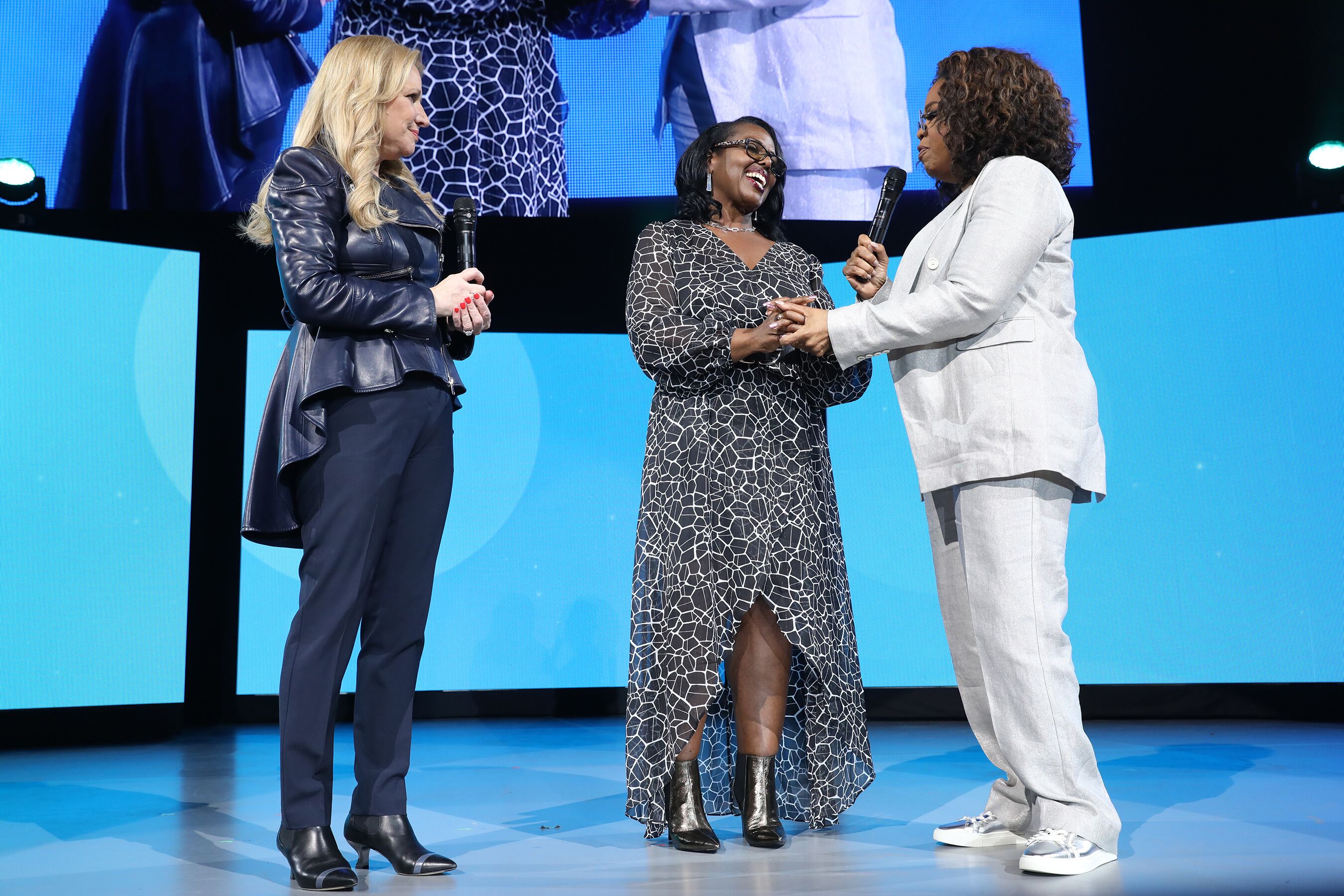 The day continued with multiple shifts and changes in energy, ranging from critical thinking to clearing one’s mind completely. There were pauses in Oprah’s lecture where she would reference the 2020 vision workbook. It was an exercise book given alongside other gifts. The audience filled it out as Oprah went through each activity. Subsequently, a silent moment of meditation with Jesse Israel engulfed the stadium. In transition,  Winfrey dismissed the masses to have a sponsored lunch by Panera bread. After shuffling back into the Forum, the afternoon session shook up the calming pulse with KINRGY, led by award winning choreographer, Julianne Hough. KINRGY intertwines earthly elements to free form dance movements to center the mind and body.

After the second wind of physical activity, the audience prepared for a word from special guest, Jennifer Lopez. The Award- winning singer sat with Oprah and discussed  how she has elevated to the best version of herself at age 50. Lopez shared the pride she has a mother and new fiancé; No detail was spared as they spoke about the integrated family relationships, kids, and her internal conversation. Jennifer allowed the audience to have a full glimpse at what it takes to maintain healthy relationships, but also the importance of setting boundaries for the self-preservation. 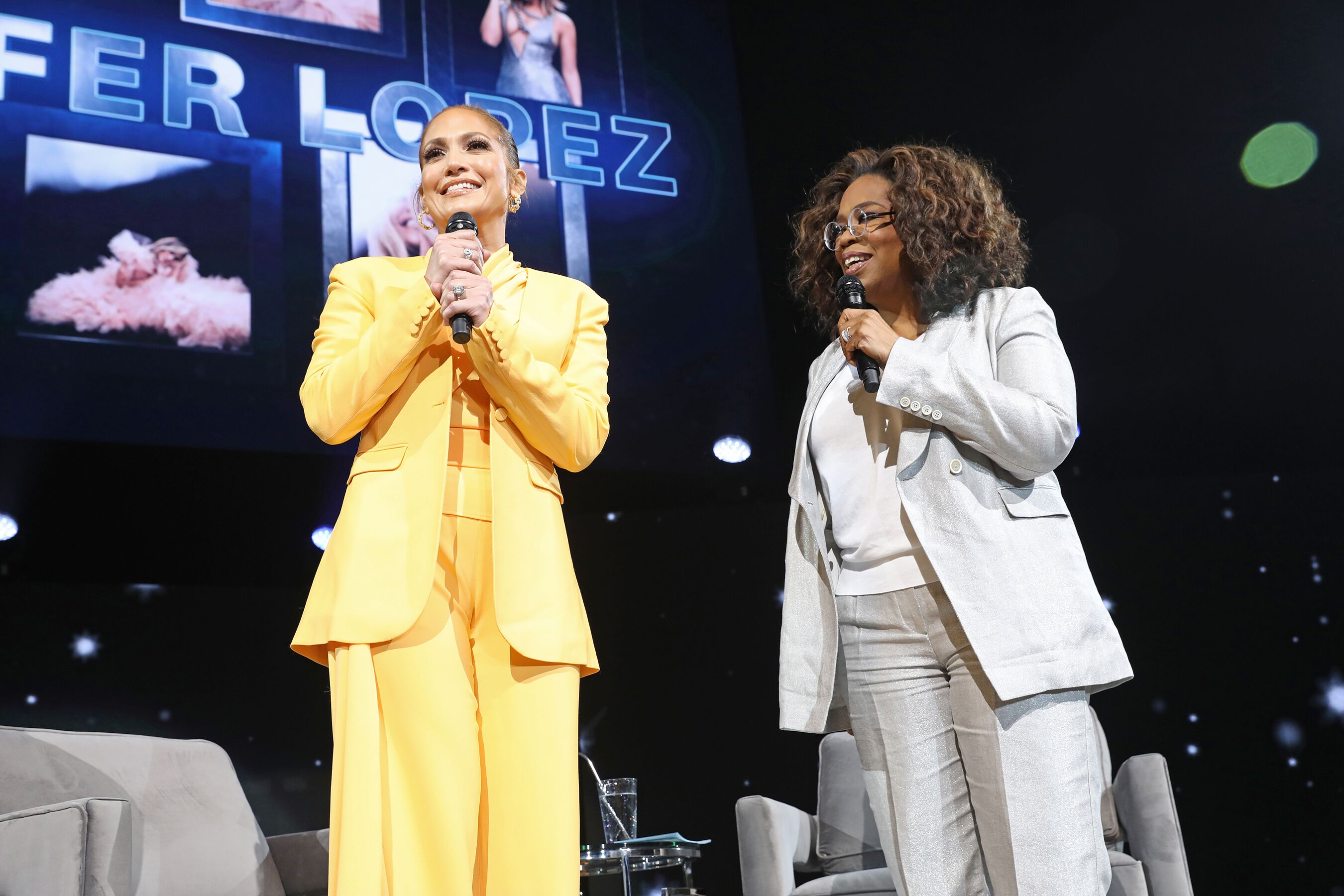 Listening to Oprah Winfrey was like a moment one would have with a relative, as they share different parts of their journey that define who they are today.  The interviewing legend displayed levels of emotional transparency that one would not usually see from someone in her caliber of T.V. and entertainment. She talked about the pain and embarrassment of being  publicly body shamed for years. But within the warmth of her voice, she displayed the simplicity in obtaining a focused and healthy lifestyle.

Oprah Winfrey vocalized her milestones, she is proud of her current body and silhouette where she  feels most uplifted and comfortable in. Merial Levy being a prime example,  WW works.  The power of the WW lifestyle triggered  Oprah to be in collaboration and present a day of healing and self-reflection for 13,000 people. Oprah curated a mindful engagement that connected the body and spirit. Merial Levy taking heed, proved  the WW program is a verified tool to wellness  and Oprah endorsed the opportunity to pass it on to change the  lives of many. 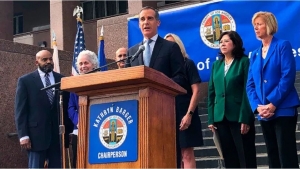