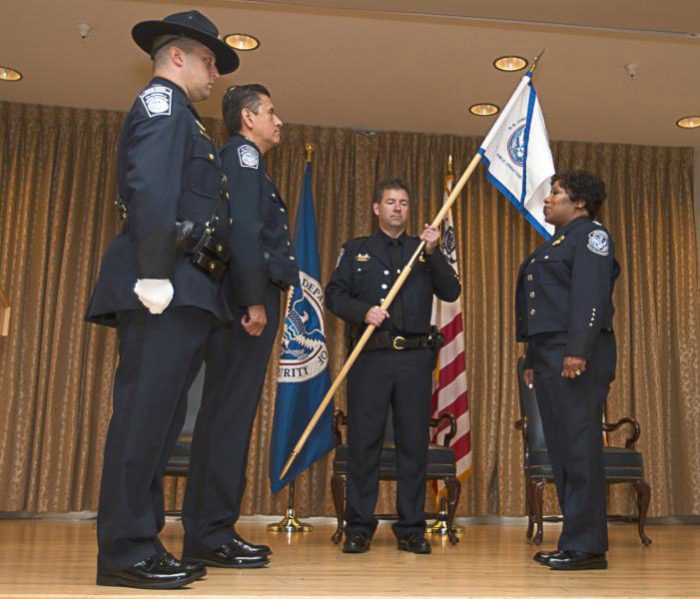 The transfer of the CBP guidon from the Deputy Executive Assistant Commissioner to the Port Director symbolizes the conveyance and assumption of command. (photo courtesy of cbp.gov)

“LaFonda is one of the true professionals in this organization, and I can recognize a professional because they make the mission look easy. She had made sacrifices to be successful, she had worked extremely hard throughout her career and she is bringing all those experiences and all that perspective to the largest seaport operation in the country,” said CBP Office of Field Operations Deputy Executive Assistant Commissioner John P. Wagner.

“LaFonda brings a wealth of management expertise and a unique skill set, she is an engaging person, a coalition builder and she truly is an advocate for our employees and our partners. LaFonda is also an innovator she is always looking for new opportunities to meet the needs of today and the demands of tomorrow,” remarked Carlos C. Martel CBP Director of Field Operations in Los Angeles.

Held at Fort MacArthur AFB Community Center in San Pedro, the ceremony steeped in CBP tradition, features the transferal of the CBP guidon from the Deputy Executive Assistant Commissioner to the Port Director to symbolize the conveyance and assumption of command.

“I am excited to be leading such an elite workforce of men and women here at the LA/LB Seaport,” said Mrs. Sutton-Burke in her instatement remarks. “You are the best and brightest within our organization and display day in and day out an unwavering determination to protect the American people, our economy, and our way of life; upholding our constitution and laws while demonstrating CBP’s core values of Vigilance, Service to Country and Integrity.”

In her new capacity, Mrs. Sutton-Burke oversees the largest seaport complex operation in the United States and the 10th largest in the world. She is responsible for managing all operational and administrative aspects of port security and trade facilitation. Approximately 35.6 percent of all international inbound sea containers arrive into the United States through the Los Angeles/Long Beach Seaport.

In Fiscal Year 2016, $278 billion worth of merchandise was imported through the seaport complex. She manages a staff of over 660 employees along with a multi-million dollar portfolio of Non-Intrusive Inspection (NII) technology with the primary mission of preventing terrorist and implements of terror from entering the country; while facilitating legitimate trade and travel.

Prior to her current assignment from 2012 to 2016, Mrs. Sutton-Burke served as the Director of the NII Division within the Office of Field Operations located at CBP Headquarters. In this role, she oversaw a $4.6 billion portfolio of all NII technology lifecycle functions consisting of over 40,000 pieces of X-ray and imaging equipment that provides critical interdiction and detection capabilities to over 320 ports of entry and 52,000 CBP officers and agents.

Mrs. Sutton-Burke joined the U.S. Customs Service as a U.S. Customs Inspector in El Paso, Texas, in 1993 and served in various roles within the organization and CBP after its creation.

Mrs. Sutton-Burke received a Bachelor of Science degree in General Education from the University of Central Oklahoma, a Masters Certificate in Project Management from George Washington University, and is a graduate of CBP’s Leadership Institute Class #1603, University of Maryland’s, Robert H. Smith’s School of Business.

Mrs. Sutton-Burke is married to Clinton Burke and they have one daughter, Sequoyah Burke. She has served as LA/LB Seaport Port Director since January 2017 prior to today’s formal instatement.