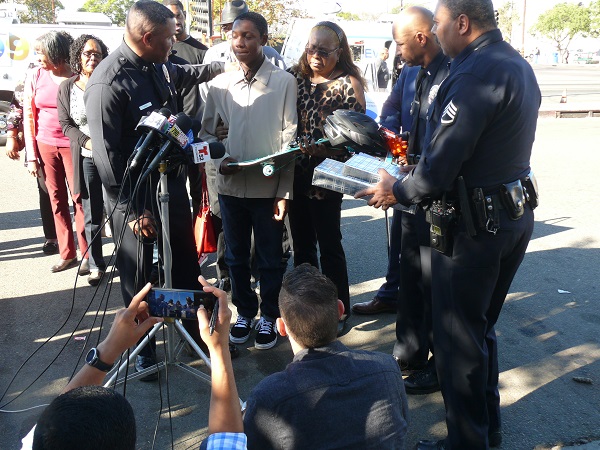 LAPD presented Anthony with gifts and a new skateboard after his was stolen while attending to his mother after the hit-and-run.
(Photo Brian W. Carter/L.A. Sentinel)

On Friday, December 29, a press conference was held at Brenda Marsh-Mitchell Square, at the corner of Crenshaw Blvd. and Coliseum St., the site on hit-and-run investigation of Gloria Eaton-Breaux on Crenshaw Blvd. on Christmas night. The Los Angeles Police Southwest Division is seeking more information and offering a reward for information leading to the identity, arrest and prosecution of the person or persons involved.

Eaton-Breaux and her son, Anthony, were crossing Crenshaw Blvd. after celebrating his 14th birthday at Denny’s Restaurant. Anthony, on a skateboard, had successfully crossed the street. Eaton-Breaux, who suffered from a leg condition, was still crossing the street and was fatally hit by a vehicle, whose driver refused to stop and sped off after the accident.

Based on video surveillance, the vehicle that struck Eaton-Breaux is described as a black, possibly a Honda Accord, a Civic or Nissan Altima, which was traveling southbound on Crenshaw Blvd. LAPD is following up on leads and reviewing extra footage from cameras in the area. Eaton-Breaux’s mother-in-law, Michelle Brooks and Anthony, spoke at the press conference. 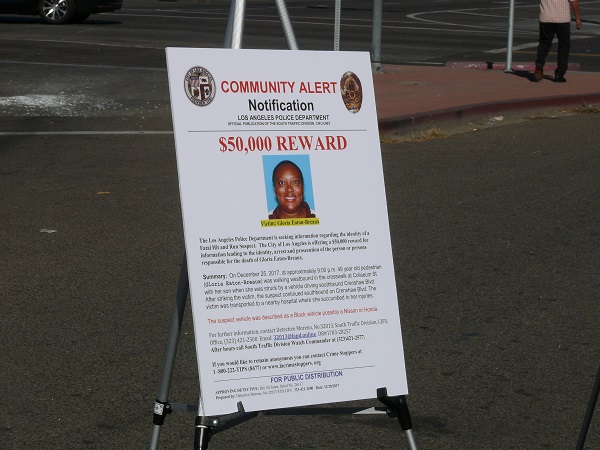 Los Angeles Police Southwest Division is seeking more information and offering a reward for information leading to the identity, arrest, and prosecution of the person or persons involved.   (Photo Brian W. Carter/L.A. Sentinel)

“This is my grandson—I’m going to miss his mother,” said Brooks. “She was like a real daughter to me and I wouldn’t know what to do without her.

“I just want [the community] to keep us in your prayers, keep us uplifted and pray that the Lord will give me strength to go through this because I never had to do anything like this in my entire life.” 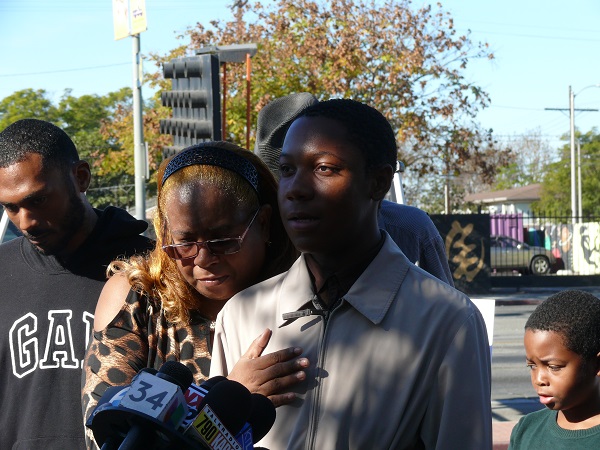 Gloria Eaton-Breaux’s son, Anthony asked for the person who hit and kill his mother to come forward and that he forgives them.
(Photo Brian W. Carter/L.A. Sentinel)

Brooks stated that she has made funeral arrangements for Eaton-Breaux for January 12.

“We are asking for the public’s help to give us information on the person who committed a horrible crime by killing this individual here at this intersection by not stopping and running her over,” said Captain Lee Sands, LAPD Southwest Area Commanding Officer. “If anyone knows anything that might have [seen] something that night, on [December 25] at 9 o ‘clock at night, to please call the police.”

Even though Eaton-Breaux had a leg condition, it didn’t stop her from getting around. She was described as being a caring individual that reached out to her community and had a host of people who loved her. She took her son to Denny’s to celebrate his birthday and had presented him with a new skateboard that evening. In the commotion of the hit-and-run, Anthony’s skateboard was stolen. LAPD presented him with gifts at the press conference, among them, a new skateboard.

Anthony, a high-functioning, autistic musical prodigy, had some words he wanted to share with the person(s) that hit his mother on Christmas night.

“I do forgive you but I just want you to, wherever you are, just turn yourself in,” said Anthony.

LAPD is asking for anyone with possible information on this hit-and-run to contact the Southwest Division. They also suggested calling crimestoppers and the call can be anonymous. You can submit a tip at 1-800-222-8477 or visit www.lacrimestoppers.org.

A GoFundMe account to help Anthony in the wake of his mother’s death was started by the family.