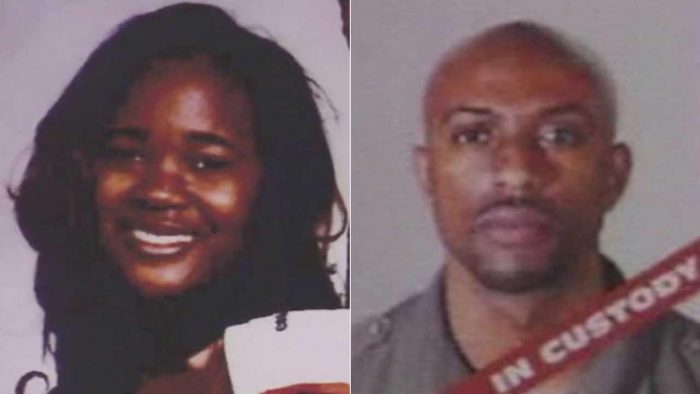 A jury deadlocked last Thursday on whether to recommend the death penalty or life in prison without the possibility of parole for a man convicted of the 2001 killings of a pregnant woman and her unborn son at her Hawthorne apartment.

The Los Angeles Superior Court jury was split 7-5 — with the majority favoring a life prison term for Skyler Jefferson Moore, according to Ricardo Santiago of the Los Angeles County District Attorney’s Office.

Prosecutors contended that Smyer arranged for Moore to commit the killing because the 27-year-old woman was pregnant with Smyer’s baby and refused to have an abortion.

Moore was found guilty of two counts of first-degree murder and one count of conspiracy. The panel also found true the special circumstance allegations of lying in wait and multiple murders, along with gun allegations.

Moore already is serving a life prison sentence without the possibility of parole for an unrelated 2001 killing.

He is due back in court June 1, when the District Attorney’s Office is expected to announce whether it wants to retry the penalty phase.

Smyer is also due back in court the same day for sentencing. He is facing life in prison without the possibility of parole.

A separate jury convicted Smyer of first-degree murder for the fetus’ death and second-degree murder for Taylor’s killing, along with two counts of solicitation of murder and one count of conspiracy to commit a crime.

The first jury to hear the case against Smyer last year deadlocked on the charges.

Smyer’s defense attorney, Calvin Schneider III, said he planned to file an appeal based on the court’s exclusion of evidence he said pointed to another perpetrator.

“I think it’s clear that somebody else committed the crime,” Schneider said after the verdict earlier this month. “I’m disappointed that the jurors didn’t find that there was reasonable doubt.”

Deputy District Attorney Danette Meyers told City News Service she understood the jury’s decision to find Smyer guilty of second-degree murder in the case of the mother and first-degree as to her baby-to-be.

“The intent was to kill the baby,” Meyers said after the verdict. “The premeditation went toward killing that baby.”

Prosecutors said Smyer and Moore met at the basketball courts at Anderson Park in Redondo Beach.

Moore was a member of the East Coast branch of a Southern California gang and new to the area, according to Deputy District Attorney Rosa Zavala.

“He was looking to build a reputation for himself” and offered to kill Taylor in exchange for Smyer’s loyalty, Zavala said during opening statements.

Moore’s defense attorney, Richard Everett, told the jury there was “little or no evidence” that Moore knew Smyer, and “no physical evidence to tie Mr. Moore to the murder of Crystal Taylor.”

Everett contended that his client was in solitary confinement in state prison while serving a life term in the unrelated murder case when detectives went to interview him, and that detectives told his client they could help him get better living conditions in prison if he cooperated with the investigation.

He said Moore was hoping to get “some of the benefits they were offering” and gave a “false confession.”

“Mr. Moore did not kill Crystal Taylor,” his attorney said.

Prosecutors told jurors that the victim’s pregnancy was “the motive for the murder.”

“Smyer needed an alibi … He needed someone else to do it for him,” Meyers said.

Another woman was attacked twice while she was pregnant with two of Smyer’s children, the prosecutor said.

“Who attacks a pregnant woman? The person who has the motive,” she said of Smyer. “He did not want that baby.”

Smyer’s attorney told jurors that it was “absolutely tragic what happened to Crystal,” but maintained that his client wasn’t involved with arranging the killing.

“There’s no justice convicting Mr. Smyer when he had nothing to do with this,” Schneider told jurors in his closing argument.

The defense attorney contended there wasn’t any evidence of an agreement between Smyer and Moore, and questioned why Smyer — who was not involved in a gang — would pledge his loyalty to a gang. He also told jurors that authorities had Smyer on their radar from the start of the case and “didn’t investigate anyone else.”