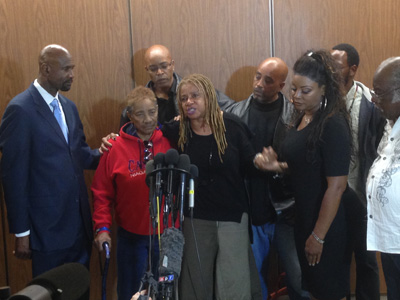 Families of victims of Lonnie Franklin, Jr. with advocate Margaret Prescod of the Black Coalition Fighting Back Serial Murders at May 5 press conference inside L.A. Criminal Courthouse.  (Charlene Muhammad photo)

A jury found Lonnie Franklin, Jr. aka the Grim Sleeper guilty of killing 10 Black females and attempting to kill another, over a span of nearly three decades.

After 1-1/2 days of deliberating, the seven woman five man jury brought the packed courtroom to tears.  A clerk read their verdicts.  With each count, it seemed the heads of some victims’ families sunk lower and lower, their shoulders shaking more rapidly as they cried.

During a press conference outside, the families told reporters just how they have been scarred.

“It’s a big day today that the jury came in and rendered their verdict: guilty. It’s a great relief to have heard that … It’ just a relief … but as far as anything else, he took my daughter’s life along with the other lives that were taken with no feeling whatsoever,” said Porter Alexander, Jr.

His daughter, 18-year-old Alicia Alexander, was found in an alley under a blue foam mattress with a gunshot wound to the chest.  That was on September 11, 1988.

Mr. Alexander said he would never understand how a human being could be so cold and uncaring.  “He was the judge and executioner.  He judged my daughter in the sense of what he felt and he took her life.  An eye for an eye. A tooth for a tooth,” he said.

Irene Ephriam was in her 20s when her 34-year-old aunt Henrietta Wright’s body was discovered on Aug. 12, 1986.  She recalled having to identify her aunt’s body.

“It’s closure.  It’s been 30 years, and we needed this.  It hurt our family to lose her. It kind of destroyed us. She had five kids,” she said.  She also said she will pray for Mr. Franklin.

“I forgive him, but he didn’t give them a chance to do that,” she continued.

After all these years, she said she never gave up hope, especially given today’s advanced science and technology.

The jury also found the former city sanitation worker guilty of the attempted, willful, deliberate and premeditated murder of the sole surviving victim, Enietra Washington. She was 30 when she was shot and thrown from Franklin’s car after accepting a ride on Nov. 19, 1988, she testified during the three-month trial.

Meanwhile, the Black Coalition Fighting Back Serial Murders, founded by local activist Margaret Prescod, vowed to stay vigilant to see to it all of the women believed victimized by Mr. Franklin or whomever are brought to justice.

“As we move forward from this place and go on to the next phase of things, we know that this is one stage of justice,” Ms. Prescod stated.

She underscored the very conditions exist in South L.A. that existed when the beloved sisters were murdered.  “We are recommitting ourselves today to continue that fight for justice for the 35 women in the photos that were found in Lonnie Franklin’s home that remain unaccounted for.  We want justice for them as well,” said Ms. Prescod. 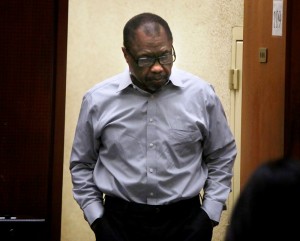 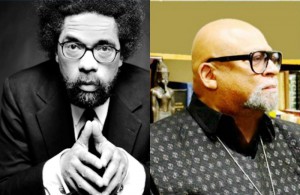 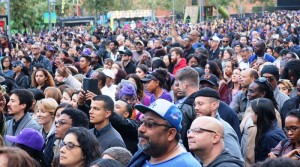