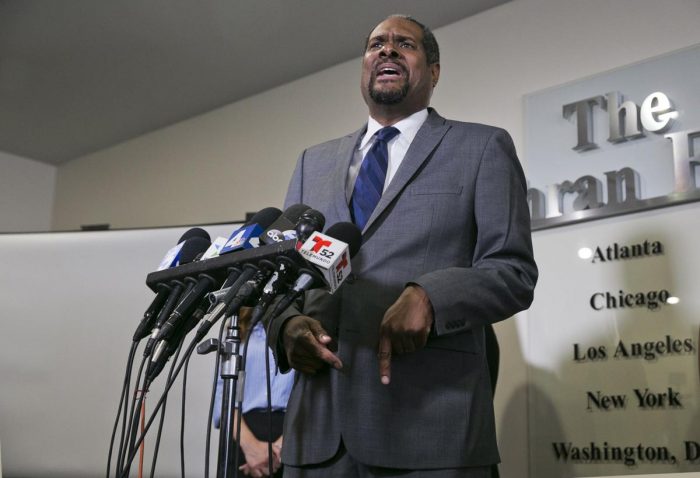 Attorney Brian Dunn talks to the media at a press conference in Los Angeles Wednesday, Aug. 1, 2018. The family of Elizabeth Tollison filed a claim against the police department and the city, saying Wednesday that officers showed no regard for her life as she was briefly held hostage on June 16. Dunn, who’s representing Tollison’s family, says the department violated training protocols and should have tried harder to de-escalate the situation. (AP Photo/Damian Dovarganes)

Family members of a woman shot and killed by Los Angeles police officers while she was being held hostage, have hired the Cochran firm to help them file a wrongful death and negligence claim against the department on their behalf. In the claim, the family is bringing “causes of action which include but are not limited to, wrongful death, negligence, negligent hiring, negligent training, negligent supervision and negligent retention, assault and battery and federal and state civil rights violations,” said a spokesperson for the firm. Because of the officers’ actions, family members said they have suffered damages including the loss of love, companionship, comfort, care assistance, protection, support and incurred funeral and burial expenses.

Cochran firm attorney Brian Dunn told reporters that the shooting was a “complete departure from the department’s training for hostage situations.”

On June 16, in Van Nuys, California at about 1:10 p.m., Tollison had been standing outside a homeless outreach center at about 1:10 p.m. when officers, not named in the complaint, were confronting Guillermo Perez, who they suspected was the assailant in an earlier knife attack. Perez grabbed Tollison and held her at knife point during the confrontation. According to the complaint, “While Ms. Tollison was being held by Mr. Perez, the three respondent officers negligently discharged their department issued firearms at Mr. Perez and Ms. Tollison, firing a total of eighteen rounds, some of which struck Ms. Tollison’s person.”

Tollison, said the complainants, died as a direct and proximate result of the gunshot wounds.

“It is illogical and inconceivable for an officer on the scene to not realize that she will certainly be shot if 18 rounds are fired,” Dunn told the media during a press conference last week.

They said that officers failed to use proper tactics when arresting a suspect in a violent crime not involving a firearm and in the detention of someone armed with a knife or other edged weapon.

“Officers negligently, through actions and inactions, failed to use additional department resources during the incident, failed to maintain a position of tactical advantage, failed to utilize/ and or appropriately utilize lethal and less lethal force options and other alternatives less intrusive to deadly force,” according to the complaint.

The Daily News reported that officers arriving at the scene found Perez holding a long serrated knife and a folding chair. They commanded him to drop his weapon, then fired bean bag rounds at him from a shotgun, one hitting Perez in the chest. But Perez, after a few seconds, grabbed Tollison who had been leaning on a walker and that’s when officers issued the fatal gunfire.

Department officials released a video of the shooting on July 31. Police Chief said he would review the incident to determine if officers actually followed training during the incident. All officers are trained in taking precise headshots in situations where a suspect takes a hostage or human shield. Those types of situations have usually been resolved by officers taking accurate aim at hostage takers, he said. In fact, before this shooting, no hostages in similar situation had been killed in 13 years.

That fact did little if anything to assuage the victim’s family.

“I’m sure if the hostage was somebody important, the situation would have been handled differently,” said twenty six-year-old Jesse Pelaez, Tollison’s son.

“But you can see in the video that the police had no regard for my mother’s life, and shot her down.”

The claim further stated that respondent officers were negligently hired, trained and retained by the city of Los Angeles and the Los Angeles Police Department, “which was further a proximate cause of the injuries sustained by claimants and claimants’ decedent as a result of the subject incident.”

The family is claiming an amount in excess of $10,000 “and within the unlimited jurisdiction of the Superior Court of California”.