Aspiring songwriters will hone fundamental skills such as lyric and melody development, chords and song progression, recording techniques and business basics. At the end of the course, each participant will get to record their work at a professional recording studio on site. In October, WHAA will also host an Artist Development Series to provide instruction on music business, stage movement development, image development, and a performance lab.

Founder of White Hall Arts Academy, Tanisha Hall expressed, “The key element to every good song is a story. Learning to tell stories, is critical to writing timeless songs. White Hall has flourished since 2011 as a result of the stories, determination and talent of our students of all ages.”

White Hall Arts Academy is a performing arts conservatory and non-profit located in South Central Los Angeles. WHAA students have been featured on “The Voice,” “American Idol,” “America’s Got Talent,” “Tyler Perry’s Meet The Paynes,” Netflix series “On My Block,” “No Good Nick” and “Trinkets” as well as many other movies, series and commercials.

Registration for the inaugural September Songwriters Series is now open to songwriters ages 15 and up at whitehallacademy.org/fall2019 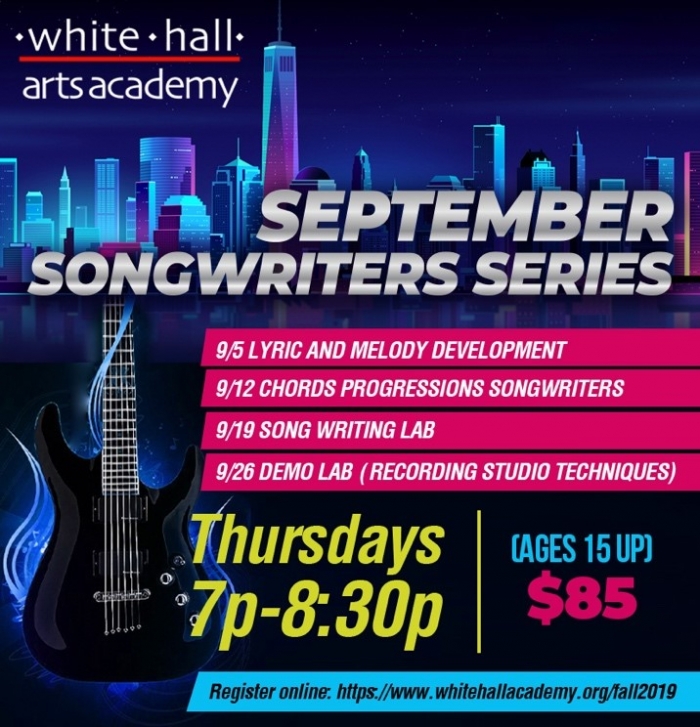 Every Thursday in September at 7p-8:30p