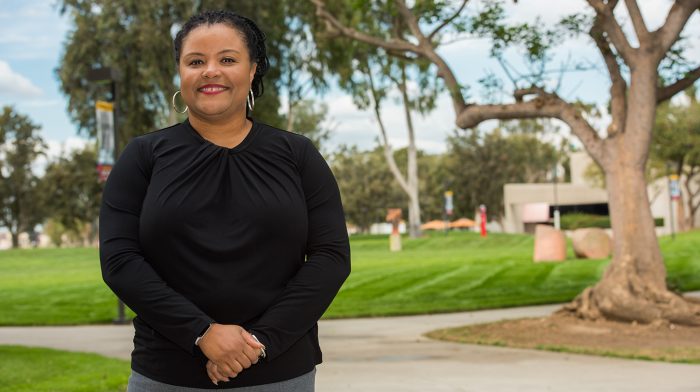 Donna Nicol, associate professor and chair of Africana Studies, arrived at CSUDH in fall 2017. As a faculty member, she teaches Comparative Ethnic and Global Societies. As chair, Nicol is working with her colleagues and the university administration to strengthen the program’s curriculum and bolster its presence on campus and in the region.

A fourth-generation “Comptonite,” Nicol’s deep local roots and unique upbringing in a community-focused family has had a profound effect on her as a researcher and educator. She briefly left South Los Angeles for Ohio State University where she earned a Ph.D. in Social and Cultural Foundations of Education with a specialization in African American higher educational history, and a minor in African American Studies in 2007.

Prior to coming to CSUDH, Nicol was the first woman of color to be promoted and tenured in Women’s Studies at CSU Fullerton. She joined the faculty ranks at Fullerton after spending nearly a decade working in higher education administration, a nontraditional career path that she believes gives her a unique perspective on the ethos of public education, and an advantage as an academic chair.

Much of Nicol’s past research has focused on the role that political forces outside a university have on African American college students, primarily conservative philanthropic foundations. She has presented her work at national events, and has published a variety of articles in such publications as Race, Ethnicity and Education and Feminist Teacher.

Nicol is now exploring the dynamics of women of color teaching and working in academic administrative positions in higher education, and the unique ways they wrestle with “cultural-identity taxation,” which she says affects their success on campus as well as their personal lives.

Nicol sat down with CSUDH Campus News Center to discuss her unique Compton upbringing, her latest research, and her perspectives regarding the African American experience in higher education.

Q: To get started, can you tell me about your upbringing in Compton, and a little about how it influences you as an educator?

A: My family moved the Compton because it was one of the few places in Los Angeles at the time that allowed African Americans to buy homes. Coming from a military background—my great-grandfather was as an Army doctor during World War I—my great-grandparents didn’t want to go back to the South with mixed-race kids (Filipino and Black). After World War II, they moved to California as did my paternal grandparents who also moved to Compton to avoid racial segregation in the Jim Crow South. We were one of the few families that had the opportunity to go to college. My great-grandfather was a doctor, so he had “cultural capital,” and taught my grandmother how to prepare for college; who passed it on to my mother; who passed it on to me.

My grandmother was half Filipino, but wanted others to also identify her as a Black woman. She was a co-founder of the Office for Black Community Development. They created the first food co-op in Watts after the Watts Rebellion. She also worked for the Compton Bulletin newspaper, and we were very connected to Compton politics and the neighborhood. So I was culturally raised Black and Filipino, but very much steeped in Black culture and history. My teaching, in part, is influenced by the local activism that I did as a child with my grandmother. I talk about identity in terms of race, informed by discussions on class and gender and how these identities shape how we interact with the world and region that we live in.

Sidebar: Donna Nicol is working on her first book “Black Woman on Board: Trustee Claudia Hampton and the Rise and Fall of Affirmative Action in the California State University System, 1974-1994,” which will be the first monograph that chronicles the work and impact of Dr. Claudia Hampton, the first African American trustee in the CSU and the first woman to ever chair a major university board in the United States. 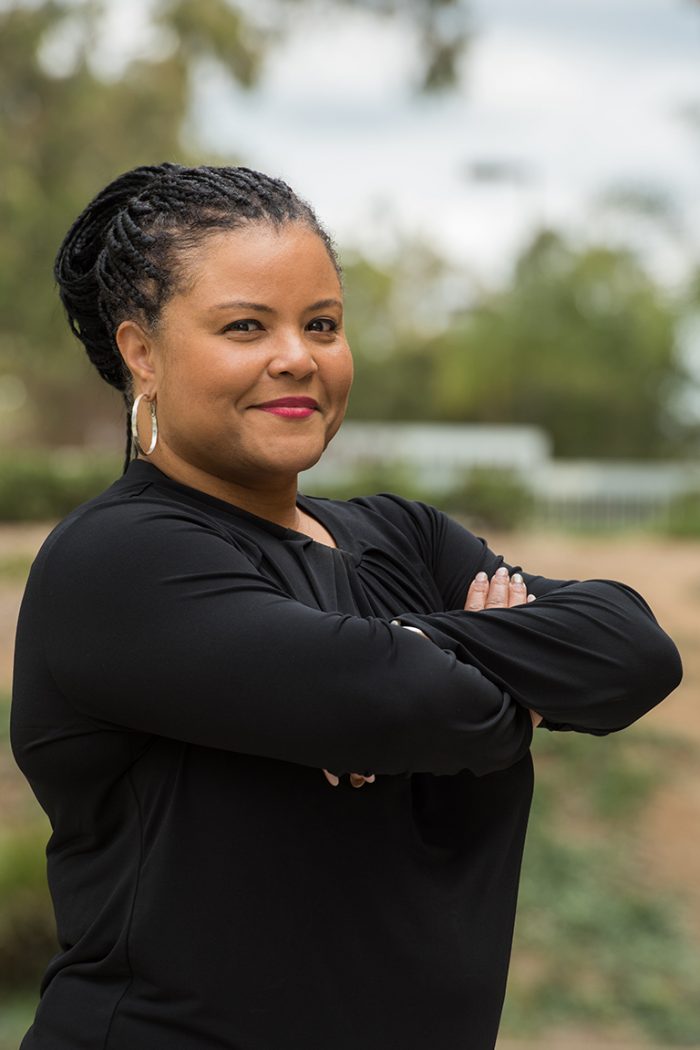 Q: Can you share why you left administration work to go back to teaching over a decade ago?

A: Being a faculty member is the first job to give me the warm fuzzies. I wanted to interact more with students again, and to experience more intellectual stimulation through research. It’s been great because I love teaching, especially here at Dominguez Hills. This university does an excellent job of giving students of color the support they need. One of the reasons I was brought in as chair at this university is I know the CSU system, and I know the language of the administration. What also attracted me to the position was the opportunity to broaden my work regarding race, which has allowed me to expand upon my previous work on the history of African Americans in higher education, and to continue my work regarding African American women as faculty and academic leaders.

Q: What are some of your plans for the Africana Studies program?

A: The program hasn’t had a full-time chair in a long time, so there is a lot to do in terms of curriculum updates and setting policies. But I like a challenge, and look forward to helping rebuild the program and increasing its visibility on campus and in the wider community.

We want to offer students more variety, and work to establish Africana Studies at Cal State Dominguez Hills as a hub for ethnic and Africana studies in the South Bay. The faculty already have some innovative ideas for the curriculum. We have been talking a great deal about developing courses around gender, namely Africana womanhood and Black masculinity, contemporary social movements such as Black Lives Matter, and creating more opportunities for students to study abroad in different parts of Africa. We already have strong African and African American history and literature curricula, and are considering different types of media coursework, such as teaching about film and social media. Our challenge is we are very small, but that is common in ethnic studies.

Q: I understand you have an article coming out regarding your research on “cultural-identify taxation.” Could you explain what that means?

A: Amado Padilla coined the term “cultural taxation” in 1994. Cultural taxation happens a lot in educational settings. Faculty of color often end up doing a lot of extra work that doesn’t get rewarded. For example, a student may come and say “I had an instructor who told me I was stupid because I’m black.” The professor ends up counseling and mentoring the student, even helping with the steps to file a grievance, which can take a good amount of time. This and other types of extra work is cultural taxation. It’s often a common expectation that faculty of color do all of the race-related work.

Identity taxation is more specific to women. Female faculty often take on the role of mother figure—mothering students through a crisis. One might say, “I’m pregnant, and my family is against abortion. What do I do?” They often come to you because they’ve built a level of trust with you. In return, you wouldn’t want to refer that student to someone else; to just hand her off. So for women faculty of color they are doubly taxed to do this extra “diversity” work and be mother figures to students without little to any recognition of the time, energy, and stress this has on our personal and professional lives.

Sidebar: Nicol has co-authored the article “Reclaiming Our Time: Women of Color Faculty and Radical Self-Care in the Academy” with Dr. Jennifer Yee, which will be published this spring in the Feminist Teacher. The article explores how cultural-identity taxation takes a toll on one’s body, mind, and spirit, and offers suggestions for combating this taxation through radical self-care practices.

Q: CSU Dominguez Hills serves the largest population of African American students in the CSU system. However, Black enrollment is down here and across the system—particularly among males. Why do you think that is? Is there another way of examining this issue?

A: Many high school students are resisting college because our K-12 system is not preparing them well. In many cases, African American students do not even have the basic requirements met to enter into the CSU. One of the biggest problems is that students are only being encouraged to graduate high school and not look beyond. We also have a glut of people with college degrees, but often no jobs for them. Many now believe we need to bring the manufacturing sector back. The question is, why weren’t we doing that in the first place? So I’m on board with finding better ways to prepare them for college, but would also suggest that African American students who are not sure about going to college consider starting at a community college where skilled trade curricula is also available to let them decide what is best for them.

Q: Whether graduating from college, or going straight to work after high school, what one piece of advice would you give young African Americans to help them prepare for today’s workforce?

A: Students really need to practice the skill of networking while they’re at the university. In the workforce, most people know how to do their jobs technically, but they often have terrible interpersonal skills, and that is really going to hold them back. Students, particularly those of color, need to be taught how to network and communicate better. It should be a part of every curriculum, including the STEM fields.