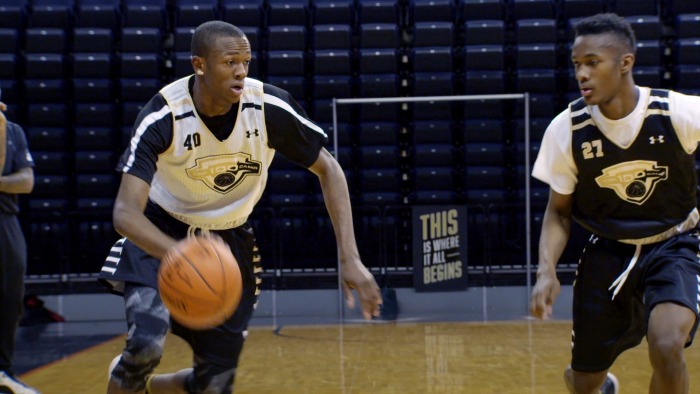 You don’t have to be a fan of the game of basketball to enjoy the 10-part docuseries “On Point,” which featured appearances by NBA stars Kevin Durant, Steph Curry and Zion Williamson.

Screen Media is a unit of Chicken Soup for the Soul Entertainment.

“On Point” is currently playing on Crackle Plus and Screen Media has acquired North American rights to the show, which is produced by Peter Berg and Film 45 as well as by Complex Networks.

Like Crackle Plus streaming platforms including Crackle and Popcornflix, Sony remains a partner in the Crackle joint venture, but CSSE controls the day-to-day operations of the ad-supported platform.

The first three episodes of On Point  premiered Monday, February 3, exclusively on Amazon FireTV devices before a wider rollout across Crackle Plus services (now playing).

The Amateur Athletic Union for decades has been a proving ground for top NBA players, who typically play AAU ball in the summer before their senior year. The 10 episodes of “On Point” offer a look behind the scenes of the high-stakes world of AAU ball and the crop of high schoolers looking to make an impression. AAU alums Romeo Langford, who is now a member of the NBA’s Boston Celtics and Scottie Lewis, now at the University of Florida, are both main characters in the show, which spotlights their lives on and off the court.

“It’s no surprise that Romeo and Scottie have each found major success since we shot the series; they all have something unique to prove,” Berg said. “On Point highlights the dedication it takes for these guys to fulfill their dreams of playing basketball at the next level while also showcasing who they are off the court.”

Screen Media calls the series “an expertly crafted, exciting look at one of the country’s best teaching and most competitive leagues that many never get to experience.”

On Point follows a previous sports-themed collaboration between Complex Networks and Film 45, on the Netflix series QB1: Beyond The Lights, which follows three of the nation’s top quarterbacks.